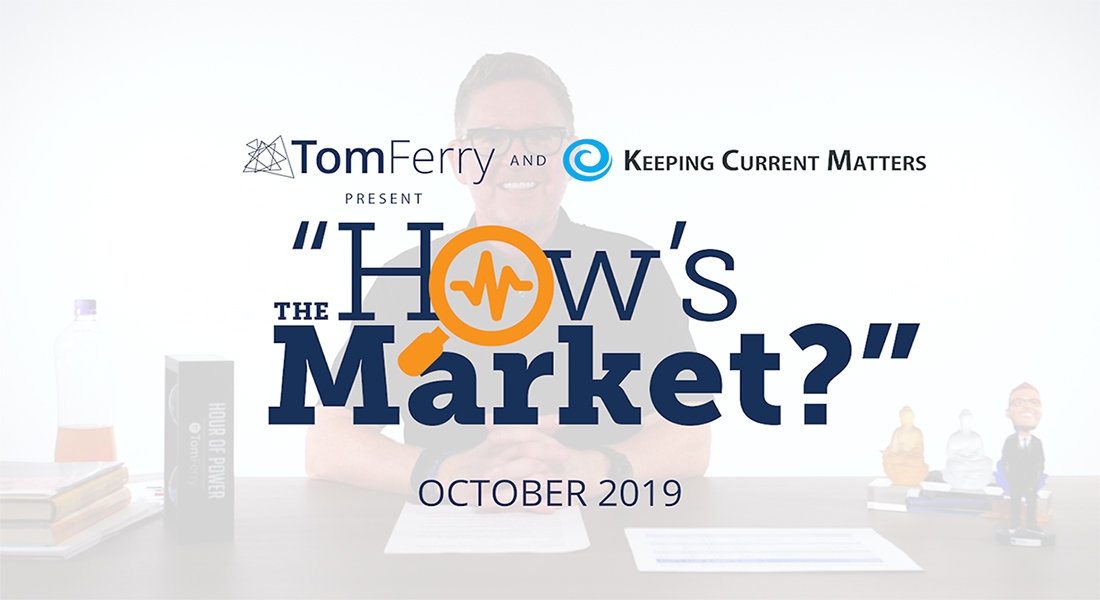 This month, we’re talking about continued good news for home price appreciation… and how increasing prices could potentially scare people off from a move.
Let’s dig in with all the info you need to keep consumers moving forward.
It wasn’t that long ago that many economists were predicting home appreciation to taper off, and even some expected price to depreciate. Man, have things changed? So, let’s talk about it. Welcome to the How’s the Market? For October 2019, where in conjunction with keeping current matters, we review all the pertinent data to ensure that you have everything you need to keep your client well informed and moving forward. If you’ve been watching previous episodes, you may have noticed that the forecasts keep getting stronger and stronger. This month is no exception. Projected home price appreciation is up across the board, including the Home Price Expectation Survey, Mortgage Bankers Association, Zelman and Associates, and all the big predictors. What I really want to stress today is a core logic report that sees home price appreciation re-accelerating.
Over the last 12 months, the nationwide increase in home prices has been 3.6%. They’re now projecting an increase of 4.5% over the next 12 months, with a strong likelihood that that number will continue to rise over the next few reports that they put out. What we’re seeing as a result is that inventory is starting to drop again, and with low interest rates remaining low, buyer demand is absolutely increasing. So due to simple supply and demand, prices are likely to start ticking up again, which could present a potential but manageable challenge. Consumers are going to start to worry that they’re being priced out of the market. When people hear reports about home prices increasing, they might just choose to bail out of the process or put their plans on hold. That’s where you come in because even though prices may start increasing, there’s a key word you need to start using to educate and inform. That word is affordability. That’s right, affordability of home is in a great place right now. Primarily due to two big factors.
Number one, the 30 year fixed mortgage rate is nearly a whole percentage point lower today than it was just on year ago. Number two, the percentage of a person’s income needed to afford a house is lower than we’ve seen in a long time. According to the National Association of Realtors, for reference the historic norm for payment as a percentage of income is 21.2%, just a little over a year ago that number was 18.2%. The latest stats show that it’s now fallen all the way to 15.7%. So even though home prices are going up, wages are up and interest rates are down, making affordability better than we’ve seen in a long time. Now you might be saying, “Tom, I’m not concerned about the buyers,” and I know you don’t really mean that. What you’re saying is, “I want more listings.” So, what does this mean for the sellers? To that, I’d say it means everything.
You and I both know it’s true. If media reports start talking about how much home prices are increasing, homeowners may start to believe that they can’t afford that move up home that they want so badly. So, they decide not to list their house. The big takeaway is simply this. Don’t let rising home prices scare people out of making a move. Educate them on affordability, and show them why it’s absolutely a great time to buy or sell real estate. So, that’s it for this month. I’d say it’s a lot of positive traction for you to work with. Now, let me know what you’re thinking. Leave a comment below. Leave a comment, leave a comment, leave a comment and as always, use this information. Share it with your clients, and I look forward to talking to you again next month.