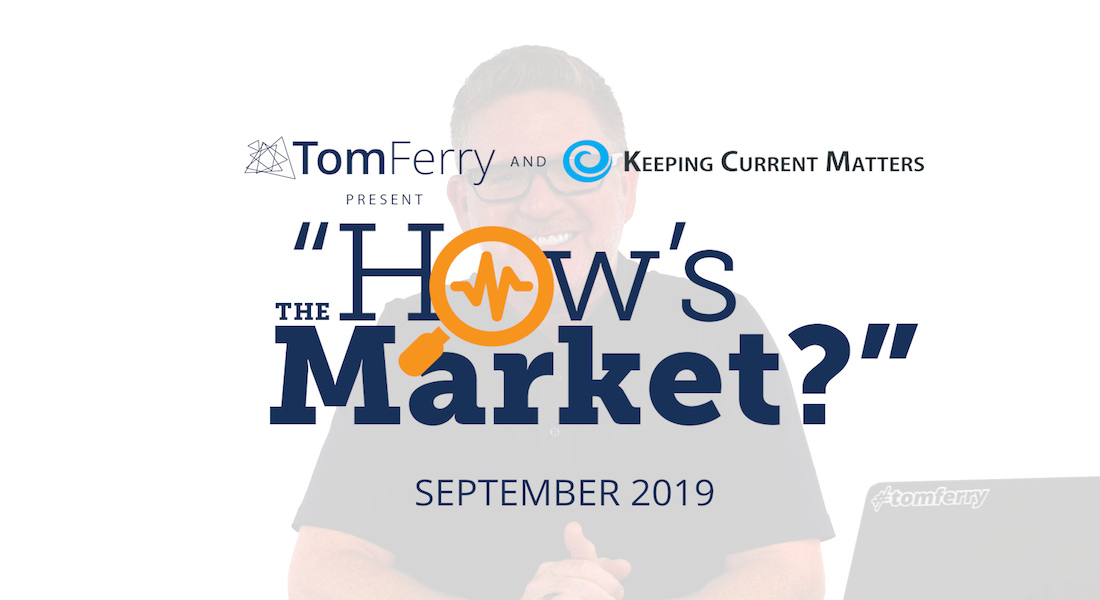 Welcome back to How's the Market? Our monthly series in conjunction with Keeping Current Matters, to keep you informed on market conditions and expert projections, so you can set the record straight and deliver the information consumers need to make the best decision for their future. In this series, we've talked a lot about how to calm the fears of potential clients. It's all about educating them on what's likely to happen when the next recession hits. So today I've got some alarming statistics for you on why this is so important. Recent realtor.com data shows that 53% of home shoppers expect a recession to occur sometime in the next 16 months or by the end of 2020. Okay, that's a lot. So what does that mean? It means that at least one out of every two people you talked to are concerned about a recession happening in the near future. Think about that. One out of two people. You talk to a lot of people every day, or at least you should be, and more than half of the people you talk to have the threat of recession hanging over their heads, and weighing on their real estate decisions. Now, let's dig deeper into that. When those same consumers are asked, if the U.S. housing market will fare better or worse than the 2008 recession, 57% said it will be the same or worse than 2008, think about that. 57% of consumers believe it's going to be the same as 2008 or worse. Now, of course, you and I both know that's not what the experts are predicting this time around, not even remotely close, so that's an extremely dangerous perception that needs correcting, but who's going to do it? The news media isn't suddenly going to reverse course and make a point to calm everyone's fears. We both know that's not what they do. No, they're going to keep stoking that fire in the name of attracting more eyeballs.

So my friend, that responsibility falls squarely on you as your market’s local knowledge broker. Why is it you may ask in your best interest to accept that responsibility and take on this role? Because of one last alarming statistic. 55% of consumers say they would halt their home search if a recession occurs. 55% say they would halt, they would stop, they’re not going to be looking for properties if a recession occurs. Now, that’s according to realtor.com. Imagine if more than half of your prospects suddenly vanished or ghosted you, or stopped responding just because of a slowdown in the economy. It’s somewhat understandable, according to Ali Wolf, the Director of Economic Research at Meyers Research. Here’s what she had to say. “With people still having some PTSD from the last market recession, they’re still afraid of buying at the wrong time.”
So sure, that’s understandable. For some people, 2008 is a wound that they’ve yet to fully recover from. So this all sounds like a bunch of doom and gloom, right? Not exactly. Let’s turn to some good news, and again, this is part of why it’s so important for you to embrace your role as the person who sets the record straight and communicates the real experts’ prediction concerning the next recession. A report this month from Housing and Mortgage Market Review calculated the probability of home prices being lower than they are today over the next two years. They looked at every single state and guess how many U.S. states they’re predicting will have a lower home price two years from now? What would you guess, just watching this video, what do you think? Let me give you the answer. Zero. Zero. Not one state is projected to lose ground in average home prices over the next two years.
What do you think? Is that a good stat to share with the 57% of people who believe the next recession will be a repeat of 2008? I would say yes. You need to be screaming that from the rooftops, in my opinion. It’s not just one report though. Core Logic basically says the same thing. In fact, a study they just released in August projects that only one state, only one state where the year over year price change isn’t at least 2% appreciation, 2% appreciation. Get this, sorry Texas. Texas is only projected to have a 1.9% appreciation and the 49 other states range from 2.4% appreciation all the way up to 8.5%.
Again, we’re giving you all the infographics, so make sure you’re getting this information out into your marketplace to further support these reports. When you look at the six major resources KCM uses to forecast future conditions, they all agree, these are people like the Home Price Expectation Survey, the Mortgage Bankers Association, Ivy Zelman and the Zelman and Associates, Fannie and Freddie, not one of them is forecasting a decrease in U.S. home prices anytime through 2022, think about that. So what we have is a huge gap between consumer perception and the experts’ predictions.
If you don’t close the gap and reassure consumers in your market, you’re putting yourself in my opinion, in a very dangerous position. You’re also doing a huge disservice to your clients by letting them freeze up when now is actually a great time to be making a move. So how do you spread the word? How do you do it? I’d recommend three things you should be doing on a regular basis. Number one, like I’m doing here video, video, video. My good friend and the KCM founder, Steve Harney told me he was thrilled to see so many people doing videos after our summit, using the messages that he had shared from the stage. He’s seen those videos you’ve been making and we both encourage you to continue. Don’t lose the momentum, make it a habit. You’ll quickly become the trusted advisor in your market. And I got to tell you a side note of one of my personal clients, she shot a video explaining what’s going on, what consumers are thinking, and then what the reality is.
And guess what? The first time she put it out on Instagram, she had over 690 views of that video. I told her, “Hey, not bad for a Sunday. Do it again four days later,” and the second time she did it, she got over 1100 views. Think about it. It’s not just saying it and doing it once, you got to do it over and over and over to really get the word out using video. Number two, use the graphs and the info from KCM as social media content for Facebook, Instagram, LinkedIn, Twitter, and everything else. And number three, obviously direct mail and or door drops, if that works for you. Make sure you’re getting this information into the hands of people in the territories and geographic farms that you serve. Look, the more people you spread the word to, the more consumer’s fear subside, and the more people start to view you as the trusted expert for the next time they buy or sell a home. So get this good news out there, and I look forward to seeing you next month.