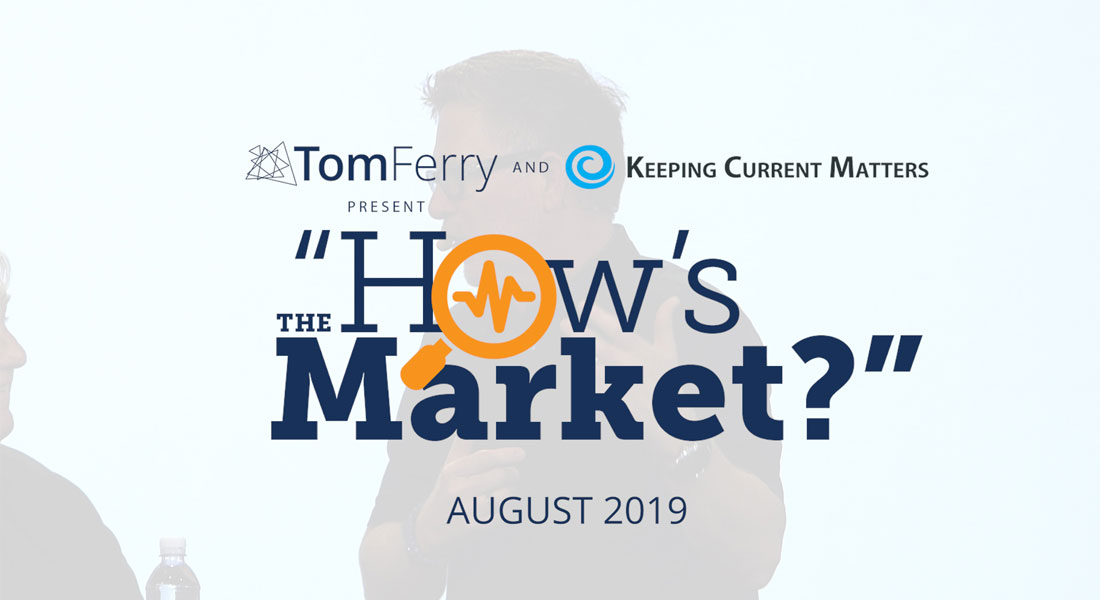 Welcome to the August 2019 edition of How's the Market? Rather than shoot a separate show this month, we opted to share a highly informative segment from Success Summit in Anaheim earlier this month. KCM Founder Steve Harney joined me on stage and shared the lowdown on what's happening in the market and how you should handle it. If you're interested in seeing more of what went down at Summit, it's not too late to purchase LiveCast so you can "own" the Summit 2019 content forever!

Steve: I usually have my slides-
Tom: I know-
Steve: This was a last minute thing. No [crosstalk 00:11:43]. All right, so let’s do it again-
Tom: 2008 [crosstalk 00:11:44].
Steve: The same people, the-
Tom: I got it.
Steve: The same people, the same day, and the same survey … Somebody give him a downer or something, I don’t know.
Audience: (laughs).
Tom: No, I’m just gonna hit record.
Steve: (laughs). They said, “Yes, a recession’s coming,” but the same people, same day, same survey also said, “Housing is not gonna be the cause of it, housing’s not even gonna be anywhere near the reason for it.” They also, on the same day, on the same survey, the same people said, “Prices were gonna continue appreciating for the next five years.” Same people, same survey, some the same day. This is not 2008, but your clients think it is.
Tom: Of course they do. How much pain did they feel then?
Steve: Yeah.
Tom: So what you need to do is you need to know what I just told you, and like Tom said, write it down and know it.
Steve: Okay. Now, again, The KC members, you have all sort of slides in this. If you’re not a KCM member, I’m gonna ask you to write down one thing is the first time, anytime I spoke, that I asked anybody to do this. Write down try KCM.com. Get a free trial. Get all the slides from this month, it’ll give you all the slides of what I’m saying now, so you can show them, and then cancel your subscription if you want to. I just can’t give ’em to you, ’cause I didn’t bring ’em with me. All right? Try KCM.com. And ladies and gentlemen, if you don’t have good information, keep the subscription until election day next year-
Tom: Yeah-
Steve: You’re gonna need it.
Tom: Strongly recommend it.
Steve: It’s $25 a month. It’s less than $400 till election time next year. Invest $400 in your own education to make sure that you have the answers as they unfold, ’cause it’s gonna get a little bit wild and crazy, not in reality, but in headlines. There’s gonna be media alarmists that are gonna make this much bigger than they’re supposed to be. Now, let’s go back one more time, ’cause my time is out. One last thing I want to say, this recession is not gonna duplicate 2008, though your clients think it is. It’s gonna replicate much closer to 2001 recession.
Tom: Thank you.
Steve: In the 2001 recession … Write this down. In the 2001 recession, the stock market fell almost 25%. In 2001 recession, the stock market fell 20 … almost 25%. Housing crisis went up 6.6%, almost double historic norms. You have to distinguish with your clients, the difference between the word, recession today versus 2008 and 2001, ’cause when they hear the word, they think 2008, you have to get them to think 2001. Throw up the slide. I have one slide, it’s the only one I had in my bag. All right. I don’t know if it’s up there? Yeah.
Tom: It’s up there.
Steve: Here are the last five recessions. In the last five … Obviously the last one, which was caused by housing and the mortgage meltdown, prices dropped dramatically. The four before that, one other time, the prices fall less than 2%. The other three times, prices went up during the recession, and two of the three times, they went up higher than normal appreciation. Why? ‘Cause you’re seeing this in the bottom of the headlines in the news, financial news, when the market gets crazy, pu- pu- people pull out and buy real estate. So all your clients that are afraid right now, they’re afraid about the wrong thing. Don’t let that happen. Now, I will tell you, whether you become a KCM member or not, but I do think you should. Just uh, till- till election day, then you can do whatever the hell you want to do. But from now until election day, it’s gonna be wild and crazy. You need help, okay? But you now … It’s not just your job. This is what I want to say to you, and I’ll end it here, Tom. Unless you have any other questions?
Tom: No, I want to do a Q&A-
Steve: This is not your j- this is not your job, this is not your responsibility, you’re not that level agent. You have much … What you do is much greater than most agents in this country. Get that. You don’t … This is not your job, this is not your responsibility, this is your moral imperative to get this information out.